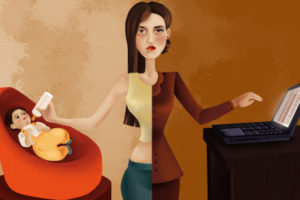 There’s a story I’ve heard countless times over the years, from both clients and colleagues. The details vary from one couple to another, but in general, the plot goes something like this:

Out of school, Amy and John each landed plum jobs in their fields. They worked hard and made excellent salaries, affording them the classic DINK (double income, no kids) lifestyle for a few years. When deciding to start a family, Amy and John discussed how best to be parents and manage their careers. It was important to both of them that one parent be home with the children. Like many of her peers, Amy chose to become a SAHM (stay-at-home mom) – and, happily at the time, left her job to begin this exciting new chapter in her life.

Over the years, John put in long hours and traveled extensively for his job, while Amy managed house, home and family. They had another child or two, and as the children thrived, Amy set aside the idea of getting back to paid work. John, meanwhile, felt increasingly unhappy under pressure to be the sole breadwinner, as the expenses of family life continued to mount and college tuitions loomed ahead. Meanwhile, in his professional life, he often met dynamic, well put together women with both full-time jobs and thriving children. He found himself wondering what Amy does all day, anyway, and why she quit her job in the first place. Perhaps he conveniently forgets that it was a mutual decision, and he may even insist that he never wanted her to quit and that it was entirely her decision.

At this point, divorce attorneys enter the story . . . and as Emma Johnson reports in her recent post at wealthysinglemommy.com, what the legal system has to say to women who chose to give up their paid jobs and now seek alimony from their ex-husbands can come as a rude awakening. Indeed, divorcing SAHMs are often in for a distinct shock when they realize that family court judges, even female ones, are not necessarily sympathetic to their plight. (Keep in mind that many female judges had their own children in day care while pursuing demanding legal careers and may not necessarily feel empathy for an educated, capable woman who deliberately gave up her earning potential.)

Johnson points out that even though many women may consider raising children a full-time job, the legal system does not. Family courts expect you to support yourself, and being a caretaker will not excuse you from that expectation.

In other words, don’t assume that because you’ve been working as a SAHM, you’ll receive alimony covering full support.

“What we often find is that many stay-at-home parents, either moms or dads, as is becoming increasingly common, go into the divorce process assuming that lifetime alimony covering full support is a given. In this day and age, however, this kind of expectation is simply not realistic,” says New Jersey family law attorney Bari Weinberger.

What’s the primary driver of this shift? Alimony reform.

“In states, such as Massachusetts, that have seen alimony reform laws passed in recent years, ‘permanent’ lifetime alimony awards are all but abolished, except under certain circumstances. In other states, including New Jersey, permanent alimonyis still available, but is far less likely to be awarded just because a parent decided to leave their career to stay home with the kids,” Weinberger explains. “What is becoming more the norm for stay-at-home moms and dads is ‘rehabilitative’ or ‘temporary’ alimony that’s put in place to help the spouse get on their feet long enough to re-enter the workforce.”

Divorcing SAHMs, confronted with this reality, have to immediately begin pursuing full-time paid work – and prove to the court that they’re doing so. Many end up taking jobs ill-suited to their education and skill sets.

Johnson concludes that she “would like to see more women buffering themselves against that situation.” How so? Keep one foot in the door of the working world, she urges. Maintain your skills and contacts, do part time work, freelance work or whatever it takes to maintain contact with the adult, professional world.

So, what happens to Amy down the road?

That depends on how she and John acknowledged and addressed the sacrifices she made in leaving her job years ago. In doing so, she gave up her salary and her peak earning years. She gave up her benefits, becoming entirely dependent on John’s employment for health insurance and retirement savings. She gave up colleagues, professional associations and memberships. She gave up all the momentum of an up-and-coming career . . . momentum she is very unlikely ever to regain. John, meanwhile, gave up none of this. In fact, he advanced up the corporate ladder quite a bit faster than he could have done without all the duties of home and family being handled seamlessly and competently by his wife.

If Amy and John recognized these realities, and were still willing to take them on, a formal postnuptial agreement would have been wise and appropriate at that time. Working out a postnup to ensure the wife’s future financial security as she leaves paid work is an excellent opportunity to talk seriously and candidly about the financial implications of that decision.

“If a couple never executed a prenuptial agreement, or does have one, but it doesn’t address spousal support, it can feel like you’ve missed the boat. Thanks to postnuptial agreements, you still have time to establish provisions to protect you financially should you make that leap to stay home and raise your kids,” notes Weinberger, adding that postnuptial agreements can pre-decide alimony amounts and address other asset division issues.

Whatever path you decide is best for you and your family, one thing is certain: you need to protect your financial future. To my mind, a prenup or postnup is an absolute legal and financial necessity for any woman choosing to give up paid work and all its associated benefits, tangible and otherwise, to stay home with the children. For more to think about, see my earlier article about why you need a postnup, and other points to consider before leaving paid work to become SAHM.

However valuable at-home parenting may be to you – and it certainly has its rewards – it is inarguable that becoming a SAHM is riskier, financially, than continuing to do fulltime paid work. Greater risk warrants greater protection, and a well-executed postnuptial agreement can provide it.