/ Blog / Divorce / Grounds for Filing for Divorce in Massachusetts 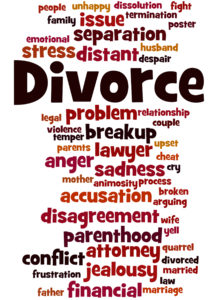 In Massachusetts there are several grounds upon which a spouse may file for divorce. There are two categories of grounds for divorce: 1) no-fault based grounds; and 2) fault-based grounds.

No Fault Based Grounds

If both parties agree to get divorced, they can jointly file for divorce through a Joint Petition for Divorce. This is commonly known as a “1A” divorce. Here, the parties jointly file a petition with the court, which is accompanied by a Separation Agreement which settles all issues regarding the divorce, and only need to prove that the marriage is irretrievably broken, and there is no chance at reconciliation.

If only one party wants a divorce, they can file a no-fault divorce by filing a Complaint for Divorce, commonly known as a “1B” divorce. Here, the parties do not initially agree to divorce, but one spouse is stating that the marriage is irretrievably broken, and has independently initiated the divorce process. In this case, the spouse does not need to prove that the other spouse is at fault for the divorce; they simply need to prove that the marriage is irretrievably broken and the parties have no chance at reconciling.

• Adultery: To prove this ground for divorce, a spouse must name the person their spouse was unfaithful with and serve that person a copy of the Complaint for Divorce, in addition to serving their spouse.

• Cruel and Abusive Treatment: To prove this ground for divorce, a spouse must prove that their spouse was abusive to them on diverse dates. This doesn’t necessarily have to be physical violence; it merely has to cause injury or harm to the victim’s health or create a fear that the spouse may harm the victim’s health.

• Gross and Confirmed Habits of Intoxication: To prove this ground for divorce, a spouse must prove that their spouse has voluntarily and excessively used intoxicating liquor or drugs on multiple dates. It does not have to be daily substance abuse, but does need to be regular bouts of intoxication.

• Impotency: To prove this ground for divorce, a spouse must prove that their spouse was impotent from a specific date up to and until the date of filing the Complaint for Divorce.

• Sentence or Confinement to Prison: Pursuant to M.G.L. c. 208 §2, if a spouse has been sentenced to confinement for live or five years or more in federal or state prison or other correctional facility, the spouse who is not in prison may file for divorce.

• Utter Desertion: To prove this ground for divorce, a spouse must prove that the other spouse left voluntarily and without justification, without an intent to return, and stayed away for at least one year prior to the date of filing for divorce. If the spouse returns, even for a brief period, and the couple tries to reconcile, the one year time period must start to compute all over again.

Generally, in Massachusetts, spouses no longer file for fault-based grounds for divorce. The reason for this being that in order for the divorce to be granted, the Plaintiff spouse must actually prove the ground for divorce that they filed for. Whereas, in a no-fault based divorce, the spouses must just prove that there is no chance at reconciliation.

Also, there is very little legal advantage to filing for a fault-based ground for divorce. In considering property division and alimony, pursuant to M.G.L. c. 208 §34, a court can consider (as 1 of 18 different factors) the actions of a spouse in divorce, and based upon that factor, can award an unequal division of property or greater alimony. However, this is only 1 of 18 factors that must be considered in property division and alimony, and, thus, may not be a controlling factor.

Therefore, in general, spouses now file a no-fault based divorce.

5 Ways to Detox Your Body and Mind After Divorce

Divorce is extremely difficult to go through. Here are a few helpful tips to add to your routine that will detox your body and mind after divorce.
View on Facebook
·Share