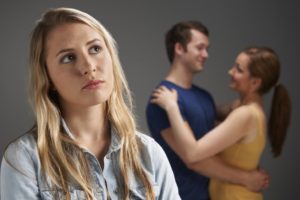 The reality is that if spouses are at the point of divorce, it is not unlikely that one or both spouses have already moved on and entered the dating world again.  The main areas where infidelity can impact a divorce is with property division and parenting time.

When it comes to property division in Massachusetts, there are a number of factors the Probate and Family Court must consider in dividing the marital estate.  Those factors are outlined by Massachusetts General Laws chapter 208, section 34.  These factors are:

As you can see, infidelity is not one of these factors.  However, infidelity falls under the “conduct” factor.  Thus, when determining property division in a divorce, the Probate and Family Court must consider 17 different factors, and only one part of these 17 factors will include infidelity. 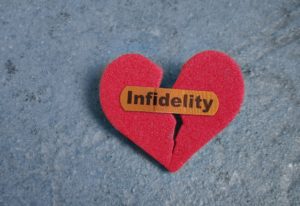 However, realistically, if each Probate and Family Court judge heard about every instance of infidelity, they would never be able to leave the bench.  Each judge would be on the bench 24 hours a day, 7 days a week, 365 days a year.  Since that isn’t practical, the court limits arguments regarding infidelity are strictly limited to any dissipation of marital assets on the extramarital relationship.  That means if a spouse spends marital funds and marital assets on their extramarital relationship, a judge can consider that a factor in property division.  However, realistically, judges will typically only consider this argument if a substantial amount of marital funds were spent on the relationship.  If money was spent on an occasional date here and there, a judge isn’t going to consider that.  However, if a spouse went on vacation with their new significant other, that is something a judge may consider in property division.

Therefore, infidelity can technically be considered in property division, but it is very narrowly construed by Probate and Family Court judges, so they are not on the bench all day, every day.

Another topic where infidelity can be an issue in a divorce is with custody and parenting time.  When spouses are working out a parenting plan, it is not uncommon to restrict the parties from introducing the children to new significant others.  Thus, if one or both parents are already dating while the divorce is pending, they can agree to not introduce significant others to the children until it is a serious relationship.  Oftentimes, this means putting a time restriction before parents can introduce significant others to the children.  This can be a few months, or even up to a year.